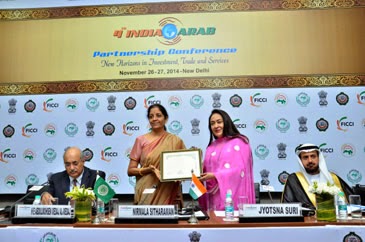 Mr. Anil Wadhwa, Secretary East, Ministry of External Affairs, hasreaffirmed the Government of India’s commitment to seriously consider the outcome of the deliberations of the 4th India Arab Partnership Conference, while fine tuning and tweaking India-Arab economic and business ties to the next level.
The conference, which concluded here today, was organized by FICCI in association with the Ministry of External Affairs, Government of India, League of Arab States (LAS), Federation of Arab Businessmen (FAB) and General Union of Arab Chambers of Commerce, Industry & Agriculture (GUACCIA).
Mr. Wadhwa said India-Arab collaboration in the use of cutting-edge technologies and their shared belief in South-South Cooperation and peaceful co-existence are bound to raise the volume of trade between India and LAS from the current level of US$ 185 billion. The Delhi Declaration adopted by two sides, he said would act as a blueprint for India-Arab cooperation and emphasized the need for setting up follow up mechanisms to identify bottlenecks in two-way trade and investment flows. He urged FICCI to take a lead in this regard.
Mr. Sidharth Birla, President, FICCI, pointed out that that we have taken significant steps towards discovering these horizons, promoting bi-directional flow of investment and exploring investable projects across sectors. While the earlier two conferences served to highlight opportunities for stronger links with the Arab region, this conference has set the stage for a bigger momentum in our engagement. He said that there were a couple of priorities emerging in terms of the opportunities that should be explored towards an extended agenda of cooperation and these include health, energy security, food security, smart cities and the demographic dividend.
Mr. Birla said that India plans to embark on a massive programme for developing skills of youth in consonance with the requirement of the industry. It would benefit both to join hands and think of ways of meeting the emerging workforce demand in the Arab nations and India’s skill development initiatives in correspondence to the same.
He said that economic ties are being complemented by enhanced two-way flow of people. Travel and tourism have taken wings - and flights between India and the region have only been increasing with time!
Mr. Birla appreciated the strong contribution of over seven million-strong Indian diaspora in the Arab world who have played a stellar role in adding vigour to the India-Arab partnership. He added that the time is right to leverage on these opportunities and take our relations to the next level. Both India and the League of Arab states have together achieved much in placing our economic engagement on a strong footing.

Dr. Mazin Al Masoudi, Incharge of League of State Missions in New Delhi, while appreciating the participants for bringing the conference to a successful conclusion read out the Delhi Declaration which is as follows:
‘Under the aegis of the Arab-Indian Cooperation Forum, the 4th India-Arab Partnership Conference: New Horizons in Investment, Trade & Services was organized during 26th -27th November 2014 in New Delhi. Ministers, senior government representatives and business executives from both the Arab States and India participated in this initiative. The conference was inaugurated by Ms. Nirmala Sitharaman, Minister of State (Independent Charge) for Commerce and Industry, Government of India.
The conference is the premier flagship initiative of the Government of India for providing an institutionalized platform for continuous and dynamic engagement of Indian and Arab business entities.
The previous three editions of the conference played a pivotal role in laying the foundations of a strategic roadmap and synergizing cooperation for economic partnership between India & LAS member states.
Today, while India is one of the emerging economies with immense potential to mould the future path of global business dynamics, LAS & its member states continue to play an important role in the international economic arena and offer many opportunities for economic & business partnership. Both sides strongly realize the necessity of deepening and enhancing their economic and trade relations through diversifying their trade portfolio, allocating feasible projects in different sectors and exchanging expertise and technical know-how.
Furthermore, the Conference succeeded in presenting a number of joint investment projects from both sides. A large number of Ministers, senior officials, Ambassadors and businessmen attended the event.
The conference witnessed participation of 20 Arab member states of LAS. Five ministers participated from the LAS member states (Kuwait, Saudi Arabia, Sudan, Palestine and Oman). Two (2) Ministers participated from the Government of India. There were 119 members from India and 102 from LAS memeber states who actively participated in the deliberations.
The declaration highlights the focused sessions on sectors such as Pharmaceutical & Healthcare, Infrastructure& Manufacturing, Energy with focus on renewable energy, Services (Tourism, Banking, IT & ITeS), Food Safety and Security (Agri Business / Food Processing/JVs), Skill Development, Higher Education and Scientific Research and Technology development.
Two MoUs were signed: FICCI and Bahrain Chamber of Commerce and Industry and FICCI and Federation of Arab Businessmen.
Saudi Arabia & Jordan participated as the Partner Countries while Gujarat & Tamil Nadu participated as Partner States. Several Business-to-Business meetings between Indian and Arab businessmen were organized. Ministerial meeting took place between five Arab Ministers and two Indian Minister. Many specialized organizations from LAS participated in the conference.’