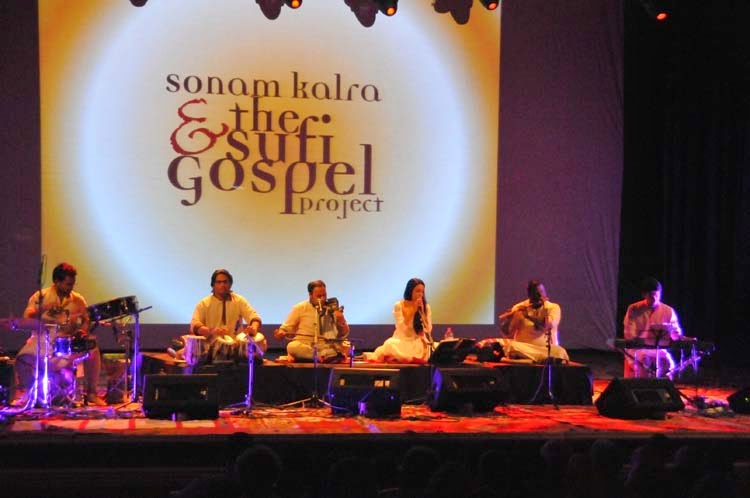 An 8-member cultural group, Sonam Kalra and the Sufi Gospel project gave a public performance at the prestigious Municipal Theater of Tunis on Tuesday, 30 September 2014. The performance was jointly inaugurated by His Excellency, Mr. Mourad Sakli, Minister for Culture of Republic of Tunisia and Her Excellency, Mrs. Nagma M. Mallick, Ambassador of India to Tunisia.

Sonam performed several famous compositions of Sufi saint Bulleh Shah as well as some gospel songs and some segments of prayers. Her songs were given scintillating accompaniment by her talented accompanying artistes on Indian instruments sarangi, tabla and flute. She was also accompanied by a keyboard artiste and a drummer. Her artistic blending of traditional Sufi styles of
singing with gospel and jazz and the dazzling artistry of the instrumental accompaniment were greatly appreciated by the Tunisian audience. Members of the diplomatic community and media and cultural personalities of Tunisia were present in the audience. The concert was recorded by the Tunisian national broadcaster Tunisia 1. The musical ensemble’s visit to Tunisia was facilitated by the Indian Council for Cultural Relations and was graciously hosted by the Ministry of Culture of the Government of Tunisia within the framework of the India-Tunisia Cultural Exchange Programme.